Just like other races, the origin of the Chartreux,its history and its name, brought many speculations about. It was mainly its name that stimulated people's imagination and legend has it that monks of the order of the Chartreux imported this race to France.

In fact, this blue-grey cat seems to stem from mountainous regions in the Middle East. Its thick and woollen fur protects it from the cold. Its robustness and its fur allowed it to adapt to new home towns.

The first reports about the life of bluey grey cats can be found in France in the 16th century. The very first document dates back to 1558 and is a poem entitled "French Verses about the Death of a Little Cat" by the French writer DU BELLAY (1522 - 1560). The author wrote down this poem during a stay in Rome. It does not merely impress cat fanciers; it also gives particular information about the traits of character, figure, constitution and colour of fur of a grey-blue cat race living in France at that time: 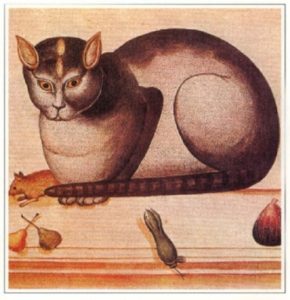 Syrian cat, described by Aldovandi in the 16th century.
This cat is probably the ancestor of the Chartreux 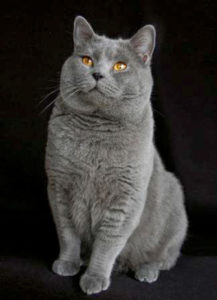 A little of my heart dies when I talk or write of him it's Belaud my little gray at Belaud who was by chance the most beautiful work that nature has ever made in the form of a cat it was Belaud who brought death to the rats Belaud was given beauty that was worthy of immortality. First Belaud was not completely gray Both in France where these cats were thought to be born and in Rome where they lived, They were covered with a coat of silver gray shiny and smooth like satin resting wavily on their backs, but with a white underside like ermine.
Powerful legs, little feet more like delicate little mittens, except when opening for scratching the delicate and tiny mouth, the tail long like a monkey, speckled diversely with motley colors. The well supported sides, the large stomach holding its contents well, and the long back. He appeared to truly be smiling, such was Belaud the gentle animal. After all see that most dexterous cat so skilled in combating the rats and mice Belaud knows a thousand ways to catch them in their dens, at the time of his finding them, more than a mousehole is needed to save them. For any rat presently alive cannot save himself once sighted by Belaud.

In the course of history, French authors wrote about purely blue cats in manifold works and articles..
In the early 18th century, the expression "Chartreux cat" = Chat des Chartreux, naming the cats of that colour, appears for the first time in the Common Encyclopaedia for Trade, Natural Sciences and Arts and Crafts, published by SAVARRY DES BRUSLON in 1723. It is a technical reference book meant for traders. It describes the entry "Chartreux" as follows: In the vernacular a cat with bluish fur is called like that. Furriers deal with its fur. In the same encyclopaedia SAVARRY DES BRUSLON defines the term Pile des Chartreux as very soft and grey wool imported from Spain. Fabrics of high quality were made of this wool. Obviously, the Parisians gave the blue cat the name Chat des Chartreux because its blue colour and its thick and soft fur reminded them of the Spanish wool. In 1735, the Swedish natural scientist LINNE, inventor of the plant and animal classification system, gives the cat the description coeruleus pilis (dark blue with very short hair) in his Latin work Systema Naturae.  In a translation of Systema Naturae, published in 1793 by VANDERSTEGEN DE PUTTE, a former juror of Brussels, the Chartreux is described as catus coeruleus with a blue-grey fur. 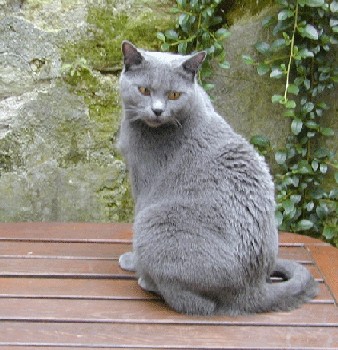 Chartreux : Chartreux is a cat with ash-grey or blue-coloured fur. This fur is used by furriers for trading purposes and it is treated in fur manufactories. 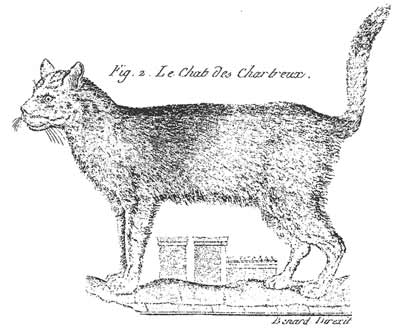 In the Grand Encyclopaedia, published in 1753, one can find the following definition for Chartreux: In the Common Animal Encyclopaedia, published in 1759, one can read: In Paris, all cats of uniform grey colour are called Chartreux.At that time, more importance was attached to the blue-grey cat as to the European domestic cat or to the Angora cat. It was used in the meat production. Its preparation has come down to us in form of recipes (The History of Nature by LINNE, edition 1740, by HOUTTUYN). The thick fur was trimmed, coloured and sold as imitation of otters' fur, called "le petit gris" = the small grey. According to its former use in the fur-farming, we find the description "otter-like fur" for the fur quality of our Chartreux in today's Chartreux race standard.

In 1756, BUFFON, the great natural scientist of the 18th century who also did many famous drawings of plants and animals, describes the Chartreux as a race easy to distinguish from the European domestic cat and the Angora cat. His description is very long and detailed. For the first time, his work contains illustrations of Chartreux. The drawings show comparisons with other cat races and depicts them as a little shorter than the domestic cat; its head having a straight nose without a stop and having a somewhat longer fur of woollen quality. Its tail is straight and pointed.

LINNE puts the Chartreux in order as a seperate cat race among the six races that were known at that time:

Other descriptions of the Chartreux race in several scientific articles followed these detailed works. The animal settled in France and became a significant commercial factor of the fur manufactory at that time. In 1896, Dr. BEAUREGARD wrote in his book (our animals): The fur of the Chartreux was sold as small grey. Razed to a half and coloured, it was worn as otter fur. Happily enough, this cat has been paid less attention to for utilitarian reasons since the beginning of the 20th century and the systematical breeding of the Chartreux as domestic and social cat started

French writer COLETTE owned several Chartreux cats and made SAHA, one of them, the heroine of her book "La Chatte". In this book she dedicated some loving and detailed descriptions to her: The sun played upon the fur of the Chartreux, mauve and bluey like a ringdove's throat. 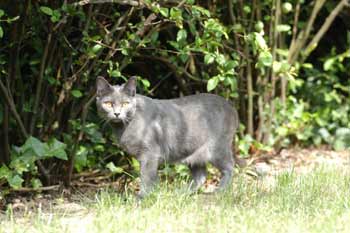 Thanks to the tireless efforts of Mr Jean SIMONNET and his wife Colette, the Chartreux breeding developed in the whole of Europe: In France, Switzerland, Italy, Spain, Portugal, Germany, Austria, Hungary, Croatia, Finland and even in the USA and in Japan. Despite the wealth of lines, the constant characteristics of the breed's starting point by the sisters Léger from Belle-Ile-en-Mer are recognizable every time. Thus, this impressing and graceful cat race wins more and more cat fanciers' heart.